A Community of Punjabi-Mexicans in California

A Community of Punjabi-Mexicans in California 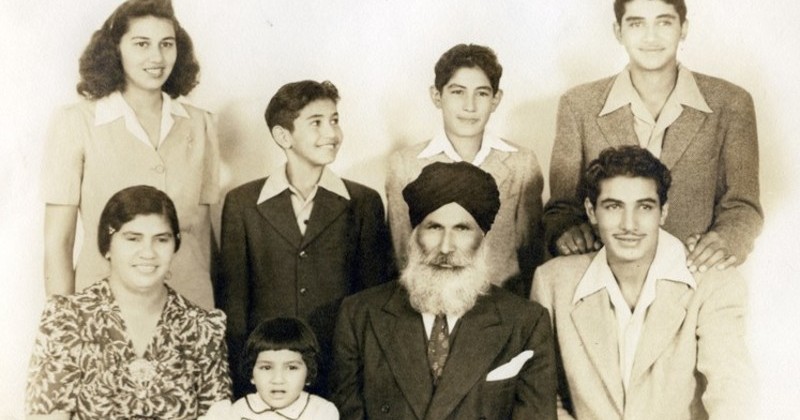 History lives through people. But sometimes it also just swallows them up - as if they were mere shadows that once marked time. Many have heard of the success of today's Sikh farmers in California's Yuba City but, outside of the area, few know of the handful of ageing Punjabi-Mexicans who still live here - descendants of pioneering Indian immigrants from the early 20th century who married cotton-picking Mexican women from across the southern border and gave rise to a community of mostly Sikh-descended, practising Catholics, pejoratively and inaccurately referred to as the 'dirty Hindus'.

Between the years 1900 and 1917, several hundred Punjabi men from British army posts in the Pacific and Far East migrated to California, lured by the prospects offered in lumber, agriculture and railroads. About 85 per cent of these migrants were Sikhs, 13 per cent Muslims and only 2 percent were Hindus. The San Francisco Chronicle of April 6, 1899, recorded some of these arrivals: "The four Sikhs who arrived on the Nippon Maru the other day were permitted yesterday to land by the immigration officials. The quartet formed the most picturesque group that has been seen on the Pacific Mall dock for many a day. One of them, Bakkshlled [sic] Singh, speaks English with fluency, the others just a little. They are all fine-looking men, Bakkshlled Singh in particular being a marvel of physical beauty. He stands 6 feet 2 inches and is built in proportion. His companions-Bood [sic] Singh, Variam [sic] Singh and Sohava Singh-are not quite so big. All of them have been soldiers and policemen in China...the tall one with the unpronounceable name was a police sergeant in Hong Kong prior to coming to this country."

However, as an ethnic group in the New World, these immigrants collectively came to be known as 'Hindus' or 'Hindoos', and the locals' initial fascination with the exotic soon gave way to economic and social discrimination against the newcomers. The Indian workers in lumber mills near Bellingham, for example, were attacked by a mob in 1907 when they asked for better pay. The Bellingham Herald, on September 5, 1907, editorialized: "The Hindu is not a good citizen. It would require centuries to assimilate him, and this country need not take the trouble. Our racial burdens are already heavy enough to bear. ...Our cloak of brotherly love is not large enough to include him as a member of the body politic. His ways are not our ways; he is not adaptable, and will not in many generations make a good American citizen. Moreover he is not even a good workman...." A hundred years later, in 2007, the city of Bellingham ate crow and marked the sad event with an apology "to heal old wounds".

Further south, in the Imperial and Sacramento valleys of California, the Punjabis prospered by tilling the fertile soil so like that of their native villages, and began to buy land. But their achievements were hampered by two new discriminatory laws - immigration restrictions that prevented them from bringing their families to the US and the Alien Land Act which stripped them of their farm holdings. And so began the saga of the 'Punjabi Mexicans'.

The Punjabis responded to their imposed hardships by marrying the Mexican women who picked cotton on their farms. Miscegenation laws prohibited marriages across racial lines in California till 1948 - but Mexican women were 'brown', a colour by which county clerks identified the Punjabi men as well, and this made it possible for the two entirely different ethnic groups to inter-marry. However, the women faced opposition from their own community, particularly Mexican men. Once married to Punjabis, they were treated as outcasts, unable to benefit from the extended kinships, quite similar to the Indian joint family systems, they once enjoyed. So groups of women - sisters, widowed mothers, cousins - started to marry these 'Hindus' and build, progressively, a biethnic race that lived, ate, socialized and prayed in an isolated and distinctive fashion.

Most of the women were young - in their teens and twenties, married to men in their thirties and forties. Some Punjabi men adopted Spanish names - Miguel for Magga, Andreas for Inder, Mondo for Mohammed. They taught their wives how to cook chicken curry and rotis although the food habits also drew from Mexican home cooking (tomato rice instead of plain rice for example). The Sikhs and Hindus also insisted on cremation, uncommon in America then, as the funeral rite for themselves, although Muslims had burial ceremonies (the plots in which they are buried in rural California are termed 'Hindu plots'). But as farmers, the men had neither the time nor the training to teach their children about Sikhism, Islam or Hinduism. The children were baptized, confirmed and married as Catholics in the church, with Punjabi men from the community standing in as their 'godfathers'. How were children, given names like Maria Jesusita Singh, Jose Akbar Khan, and Armando Chand, socialized, and how did they think of themselves? They spoke in Spanish and English, rarely Punjabi, but preferred to go to the Stockton Sikh temple on Sundays (where they met others like themselves) rather than the church where they were discriminated against by both Mexicans and Anglos. Sadly, later Sikh migrants in the 50s and 60s from India discriminated against them too, acting hostile towards the Mexican wives of the Sikh men who came to cook langar, even suggesting that the women would poison the community. Similarly, the Punjabi Muslims (who later began to refer to themselves as Spanish-Pakistanis) were not overjoyed either when newer immigrants insisted that men and women worship separately in the mosques.

Tejinder Singh Sibia, a librarian at the University of California in Davis and long-time resident of the state who died recently at the age of 70, was an unofficial archivist of Sikh history in the US - his website has a rich array of rare photographs, interviews with early immigrant families, and official records relating to their entry into the US. In an article on his site, Karen Leonard, Professor of Anthropology at the University of California at Irvine, writes:

"Most of the Punjabi descendants refer to themselves as Hindu or East Indian today. When they talk about being Hindu, these descendants do not mean objective criteria that link them to India or the Punjab-attributes such as those an anthropologist might list. They are fundamentally ignorant of Punjabi and Indian culture. For example, while most of the men who founded these families were actually Sikhs, not Hindus, their descendants (and even the descendants of Muslim Punjabis) proudly claim to be Hindu. These descendants are almost all non-speakers of Punjabi and have no sense of the Punjab's distinctive regional culture. They have a sense of place and history, however, and they possess a heritage that is distinctly Punjabi nonetheless."

The most unique aspect of the Punjabi-Mexican culture that survives to the day is its extreme tolerance and adaptability, perhaps not unusual given the fact that its heritage rests with pioneers. Nevertheless, it stands in marked contrast to later Indian immigrant communities in the US which have been more rigid, fanatic (sometimes more so than their compatriots back home in India), stuck in a time warp, and more ghetto-like. Instead of assimilating and creating new cultural strains, these immigrants have created 'Little Indias' all over America; instead of letting their children date and marry foreigners (something even Indians in India are not so averse to anymore), these families have carted their daughters back home for arranged marriages; instead of imbibing the free and creative spirit of their new land, these people have continued to push their children to go to Harvard and Stanford to continue to become engineers and doctors. Of course, things are changing now but, interestingly, only because things have changed in India too - strange as this may sound, Indians in the US like to do what Indians in the motherland do!

Contrast this to the vanishing breed of Mexican Punjabis - a community that was 'globalised' even before the term was coined, without losing pride in and respect for its heritage. Today, in Ali Rasul's El Ranchero restaurant in Yuba City, chicken curry and rotis find pride of place beside tamales and fajitas. A speciality of the house is the 'Hindu pizza', concocted from Mexican ingredients placed atop rotis, because "We wanted to make something that appeals to both Mexicans and Hindus." This, from a man who is basically a Muslim.

In her article on Sibia's website, Professor Leonard writes: "The men and their descendants state repeatedly that all religions are the same, a view again in sharp contrast to that expressed by more recent immigrants from India. The statements take different forms: The Sikh religion is just like the Catholic one; Sikhism is a composite of Islam, Hinduism, and Christianity; the Granth Sahib is just like the Bible; all goods are the same, but they are called different names because languages are different; Sikhism has the ten cruz, or ten crosses which are the ten gurus; the founding Sikh guru preached just what is in the Old Testament; Sikhs have all the commandments Catholics have; one can be Muslim and Catholic or Sikh and Catholic at the same time. Ignoring religious differences now significant in India, these statements stress similarities between the Indian religions and Christianity, frequently using metaphors and analogies to erase distinctions. While there were many vigorously contested matters between pioneer Punjabi husbands and Mexican wives, the children's religious training was not one of them. The men wanted to inculcate respect for Sikhism, Hinduism, or Islam, while they encouraged their children to practise Catholicism (or whatever form of Christianity their wives practised)."

One old timer, Moola Singh, who has thirteen children from his marriages with Mexican women, speaks of the unease that marks relations between the Punjabi Mexicans and the Sikhs in Yuba City today: "About our churches here, everybody went to the Stockton one, at least if they lived close by there, you know. Hindu, Muslim, everybody went. Afterwards, these days now, I don't know what they're doing....One thing I don't like, not for that new group, not everybody can go...And our people, everybody went and sat on chairs. That was before, not now. Then, everybody could sit on a chair. And for food, they gave it on a plate, with a spoon, and paper to clean your hands. But after that, some Indian farmers and preachers have come. They want all the customs like India, and they've taken away the chairs, put people back on the floor again."

It is unfortunate that while today the Annual Sikh Parade is a star attraction in Yuba City, attended by Sikhs from all over the world including India, the Annual Old-timers' Reunion Christmas Dance instituted by the Punjabi-Mexicans in 1974 barely draws a handful of people anymore. Most of the descendants have migrated to other parts of the US - home is where the heart is and their hearts are no longer with Yuba or the California valleys anymore.

(This article first appeared under the title The ‘Dirty’ Hindus is Hardnews magazine on March 31, 2008)