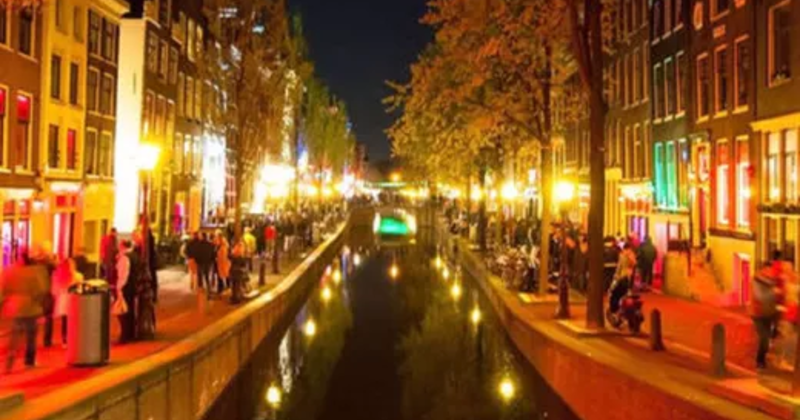 A former prostitute took me for a walk around the red-light area. Prostitution in The Netherlands has been legal for almost 200 years and is both taxed and unionised.

It is the most stigmatised profession in the world and has been either banned altogether at various times in history or allowed to flourish as a 'necessary evil'. The clientele of prostitutes has ranged from kings and generals to homeless drunks. But the women who provide the 'service' have always lived on the fringes of society, at best tolerated and at worst reviled, beaten, stoned, stalked by serial killers, or just put to death.

It is unlikely, one would think then, to find women who would want to work as prostitutes, women who are not forced into the profession by pimps or traffickers.

This is what first fired my curiosity when I read about a walking tour called 'Dark Amsterdam' while standing in line at a tourist information centre in The Netherlands. It promised me a chance to meet and talk with a former prostitute before touring the famed 'windows' of the red-light area of Amsterdam.

The tour group met at 8 pm on a January weekend at 32 Damraak, a street close to the Central Station in Amsterdam. For a late winter evening, complete with chilly gusts of fine drizzle, the number was surprisingly large and interestingly, had several more women than men.

One of our guides was Fiza, a woman of Indian origin, born and raised in The Netherlands. Articulate, and an excellent source of information, Fiza was able to explain the complex situation surrounding the legal status of prostitution and the 'tolerance' of soft drugs by the government (drugs are not legal in the country as many people mistakenly believe). But first, she took us to a place called the Prostitute Information Centre (PIC).

PIC is run by a former prostitute named Petra. She introduced herself as a worker in the "sex industry" who used to be a "domination professional, that is, worked with whips, bondage and other fetishes," before she came to The Netherlands from Canada.

Initially in the country to pursue a Master's degree in anthropology, Petra soon switched to working with her present employer to run PIC. Although she had voluntarily taken up prostitution as a profession, enjoyed her career and was not embarrassed about or ashamed of her past, Petra admitted that many sex workers were in the profession for reasons different than hers. In fact, economic necessity is often a driving force for women taking up prostitution even in affluent western nations.

If the intent of the government of The Netherlands in making prostitution legal is to remove exploitative elements like pimps and criminals and allow women choice over their bodies and earnings, PIC's work centres around helping prostitutes take greater control of their lives.

A semi-profit organisation, it charges tourists like us for the tour but provides different services – information on taxes, bookkeeping, rental agencies for windows, health and safety kits, etc. -- to prostitutes, free of charge.

The Netherlands has free HIV and STD screening clinics for everyone – visitors, prostitutes and their clients.

However, sex workers are not required by law to be screened for AIDS and STD in order to be issued a licence – the reason for this is that since clients are not screened, it would be discriminatory to mandate that prostitutes go through checks.

Legalising prostitution has led to unique problems with respect to taxation, some of which were enumerated by our guide.

Brothel owners who employ prostitutes have to provide benefits like any other employer but in the matter of say accidental pregnancies, should these be treated as a job hazard for which the employees need to be compensated? Should they be given longer maternity leave because they cannot work after the pregnancies begin to show?

Such matters have to be carefully debated by the lawmakers of the country when determining how the profession should be regulated, licensed and taxed.

The picture-postcard perfect De Wallen district, surprisingly not tacky or sleazy-looking compared with most other red-light areas around the world, is located in the oldest part of Amsterdam, near what used to be a harbour where the Dutch East Indies sailors landed.

There are no hustlers, drug dealers and pimps on the streets of the modern-day red-light area of Amsterdam (street prostitution and pimping are illegal). Instead, policemen (and police cameras) keep an eye on the high-spirited young European males negotiating with the prostitutes behind windows.

If a deal is struck, the lady opens a connecting door to let in the customer and pulls a drape across the window, a temporary 'closed for business' signal if you will.

In some of the narrowest alleys, only one metre wide where we walked single file, it was possible to make eye contact with the girls only a glass wall away, and observe the bare minimum furnishings beyond – usually a bed and sink placed on a tiled floor (carpeting is forbidden; unhygienic says the rule book).

The girls appeared to be mostly between the ages of 20 and 40, at least in the alleyways that we toured. I wondered if they had separate day jobs.

Petra confirmed that the windows are rented out in 8-hour shifts and the girls work independently as often and for as long as they want to, disappearing into their private lives the rest of the time. There are about 450 such windows in the city, with rents ranging from 100 to 150 Euros per shift. The owners of the windows are required by law to provide for the girls' safety (usually with a call button placed discreetly in the window, which a prostitute can press to summon help).

The tour ended in the shadow of an old church that stands guard over these ladies of the night.