A Fallen Soldiers Coursemates Make it Possible for His Mother to Pray At His Grave, 24 Years Later

A Fallen Soldier’s Coursemates Make it Possible for His Mother to Pray At His Grave, 24 Years Later 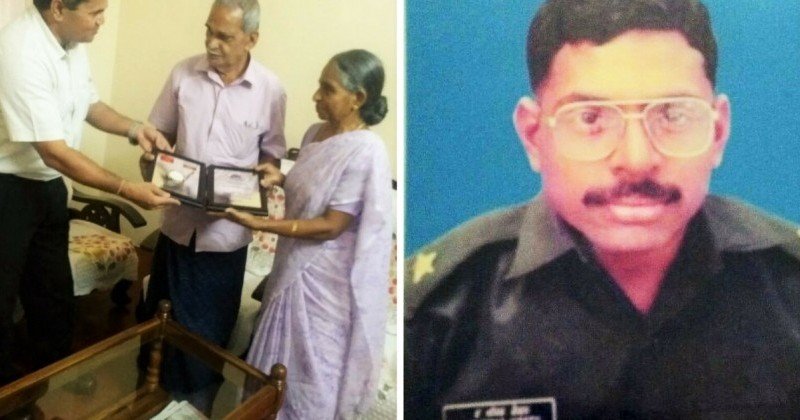 This is a story about a martyred soldier, a mother’s grief and the brothers-in-arms who banded together to do something remarkable for their fallen mate’s family.

In June 1992 in Nagaland, Second Lieutenant E Thomas Joseph had finished packing for his trip home to Kottayam in Kerala and was now enjoying a laid back last evening with other officers in the Mess. Commissioned in June 1991 in the Corps of Military Intelligence, this young officer had just finished his year-long attachment with the First Battalion of Fifth Gorkha Rifles (1/5 GR).

Suddenly, reports of some movement from insurgents in the area began to come in. The unit sprang into action as it was tasked to go into the field and neutralise the militants. The Commanding Officer got his Quick Reaction Team together. No one suggested that Joseph go along because the young officer had already got his posting orders and had been dined out from the Unit the previous day. But, since he knew the terrain well, he volunteered to go with the team for the operation at night so he could be back early next morning to catch the first convoy out. The other officers tried to dissuade him, telling him to relax and stay behind. But he insisted on going.

Alas, Second Lieutenant E T Joseph never returned to take that convoy or catch the train home to Kottayam. He laid down his life for the nation in a firefight that evening. 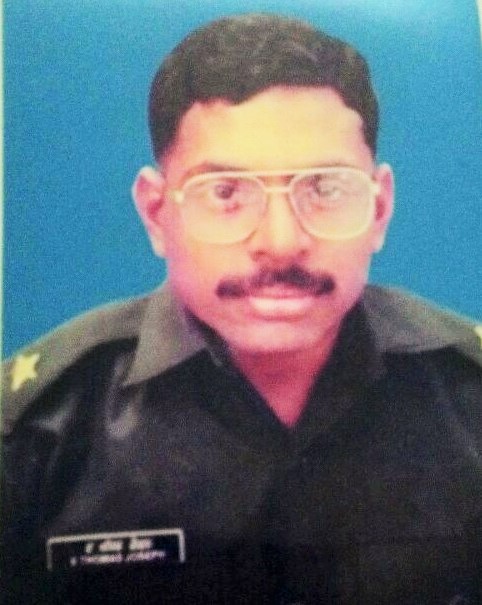 By the next day, news of Joseph’s martyrdom had travelled to Shillong where another serving soldier, Subedar Major A T Joseph, received the news of his son’s death. Stunned and in a state of shock, he immediately left for Nagaland where he laid the mortal remains of his only son to rest.

“When I went there to bury him in 1992, I was alone, except for a couple of friends, and barely there for any time. Three days had already passed since his death. I reached there at 4 pm and left at 8,” A T Joseph told The Better India.

Now, the devastating news had to be conveyed to the one person who had been eagerly waiting for E T Joseph to return home anytime. When the news of the loss of her 21-year-old son reached Mrs. Thressiamma Joseph, she and her two daughters were inconsolable. Sub Maj AT Joseph, unable to come to terms with the biggest loss in his life, had his retirement sanctioned from the Indian Army. He came back to his family in Kerala the same year. In the years that followed, he did his best to educate his two daughters, ensure the family lived decently, and had his daughters married.

Col. Sajan Moideen, one of ET Joseph’s coursemates from his IMA days, wrote about this tragedy poignantly in a blog years later: “Deep down, both Joseph and his wife Thressiamma tried their best to overcome their grief. But a sadness that had no closure couldn’t be overcome. The mother in Thressiamma longed to visit the burial place. But they were unable to afford the long journey. Where would they gather that kind of money? How would they travel thousands of miles? Who would know the place? Who would help them? With old age catching up, the hope just faded away. They hoped to meet their son at God’s abode one day.”

So, was this the end of Second Lieutenant E T Joseph and his family’s story? Is this the fate of all army martyrs – that they are honoured but forgotten? Not if their brothers-in-arms can help it! 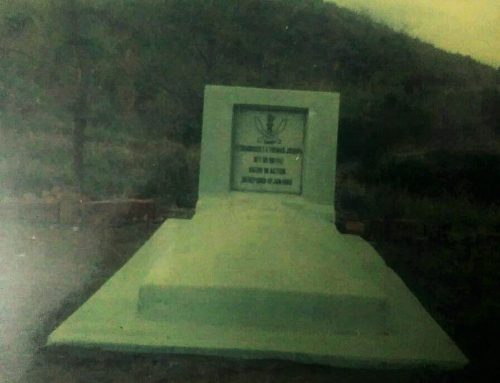 Cut, years later, far ahead of these events of 1992, to the present year of 2016. It is February and plans are afoot for a huge celebration. The 88th Regular and 71st Technical Course, E T Joseph’s course and batch from the Indian Military Academy, is preparing to celebrate its 25th year of service to the nation in June, in Dehradun.

As this batch that graduated in 1991 firms up its programme, the mood is upbeat, with coursemates looking forward to seeing buddies they haven’t met in years. However, amidst all these preparations to make the reunion memorable, an important task is not forgotten. One evening, Col. Moideen and another organiser Vikram Gill, while speaking over the phone, come up with a plan to remember and honour those soldiers from their batch who have fallen over the years. “We have to make their families proud,” they decide.

The organizers start the process of designing mementos for each next of kin (NOK) of the martyrs and preparing invitations to call them to the celebration so they can be felicitated. Efforts are initiated to find the addresses of these families. Vikram Gill prepares a list of 19 bravehearts who have fallen since they graduated. Second Lieutenant E T Joseph is first in that list. However, Sub Maj AT Joseph and Thressiamma cannot be contacted as they have shifted from their old address. “Many letters came back…E T Joseph’s was one of them,” says Col Moideen.

Eight families of martyrs travel from far and wide, including Australia, to take part in the three day celebrations in the last week of June 2016. Sadly, E T Joseph’s is not one of them.

After the event, the organizers decide that the mementos that could not be given to the families who did not attend the function, must be handed over personally. The responsibility for making this happen falls on the shoulders of an officer posted in Kerala.

The officer initiates efforts to trace Sub Major A T Joseph and his wife. The search is not easy but he is persistent. Finally, after several enquiries, success! He has managed to trace the retired soldier in his new home in Kottayam.

“I went to deliver the memento to them in July this year,” says the officer, who wishes to remain anonymous. “It was a special and emotional moment for me because E T had been my coursemate. We were in the same company – Kohima Company – he was in my platoon. He was a great friend and a very spirited person.”

“When I met his parents after a 3-hour journey, his mother and father were inconsolable. His mother was weeping because she had not even seen the grave of her son. I spent almost two hours with them,” he adds. 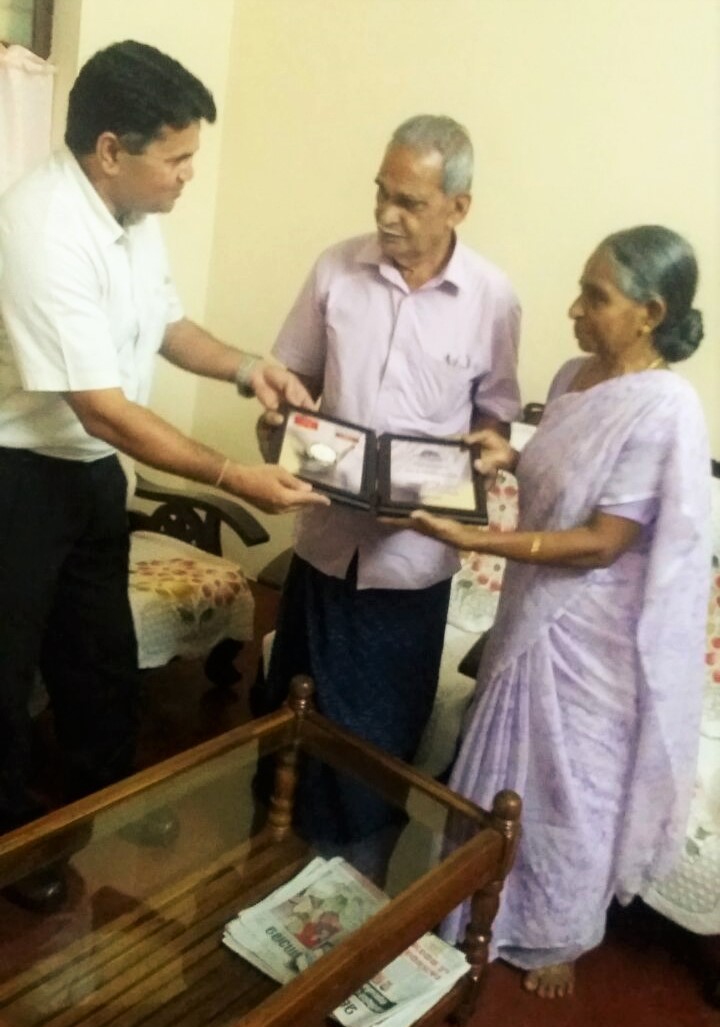 Determined to fulfil a mother’s only wish, the officer returns to Kochi and informs his coursemates of what has transpired in Kottayam. A decision is taken that the course will rise to the occasion despite the many hurdles this will entail and go all out to get Thressiamma Joseph to her son’s grave.

And the hurdles are indeed many – the old age of the parents, the finances, the long travel, and most of all…..to find the location of the grave. A quarter of a century has passed and the knowledge of the event has faded. Not much is known.

Another officer posted in the Northeast volunteers to begin the search for the tomb of the fallen soldier. He too, like the officer in Kerala, encounters little success in the beginning. But finally, the grave is found – in Chakabama, 30 kms from Kohima.

“The grave was inside a military garrison so no one knew about it. There are six graves on the site – of four Muslim and two Christian soldiers. It is not an earmarked cemetery as such and since no one was staying at the place it became a little neglected,” he says.

Everything seems to finally be coming together to help provide a sense of closure to E T’s mother. But what about the family’s journey from Kerala to Kohima and further? The family is not financially privileged to afford the trip even though the grave has now been found.

Thanks to the efforts of all the officers involved, course contributions start pouring in. Coursemates of E T Joseph – from Army, Navy and Air Force, from 78 NDA Course and 88 Regular/71 Tech Course – rise to the occasion. According to Col. Moideen, the contributions cross the Rs 2.5 lakh figure in no time at all.

Further help comes from Col. Atul Salukhe who gets in touch with his friend Group Captain Manoj Kumar, a pilot with Indigo Airlines. On hearing the story, the management straightaway agree to sponsor the travel of the parents and sisters from Kochi to Bangalore to Kolkata to Dimapur.

Speaking to TBI from his home in Kottayam, Sub Major A T Joseph says that he and his wife are grateful and glad for the opportunity to finally go to their son’s grave in Nagaland.

A T Joseph says his son never wanted to do anything else in his life but become a soldier. “I was in the Army and my kids were in Central School. I used to be transferred and my kids used to go with me. Thomas used to watch the parade. On his own, he said he wanted to join the army and take the NDA test.”

On October 8 of this year, A T Joseph, his wife and his two daughters, both teachers in Bengaluru and Kerala, will travel to Kohima to finally lay the ghosts of the past to rest. They lost their son and brother 24 years ago. But today, thanks to his band of brothers, they have gained a much larger family. 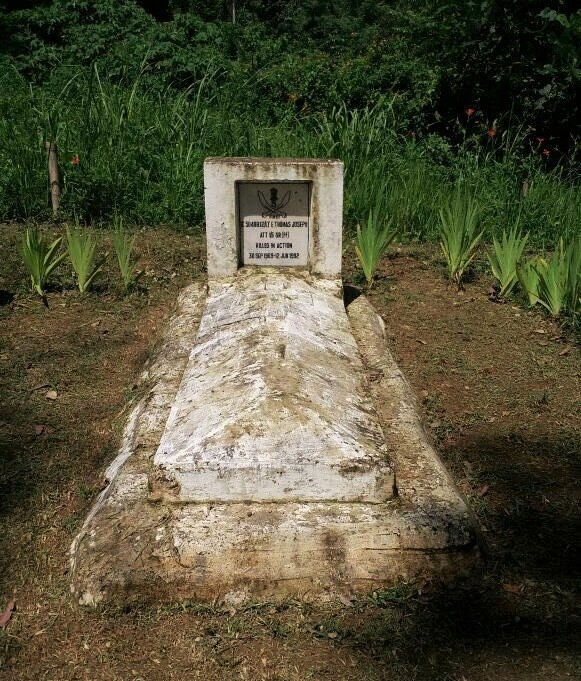 According to Col. Moideen: “Coursemates in various places are arranging stay at all these places. The grave is being done up. Permission is being sought from various authorities to ensure the visit goes on without any hassles. The Army will also play a part to ensure the visit goes well. A Senior Officer in the rank of Army Commander has assured all help. 78 NDA & 88 Regular/ 71 Tech courses are unique. ET’s parents lost one son but got back 300+. Each of the sons is striving hard to ensure the trip goes smoothly.”

E T Joseph’s parents have written to the Indian Army requesting that their son’s mortal remains be exhumed from the grave in Nagaland and transported to his hometown in Kottayam, where the local church has already earmarked space for his grave. They would like the remains to be buried with full military honours there. Hopefully, E T will finally make the journey to his last resting place to be close to his family, the way he always wanted.

(This article first appeared in The Better India on September 14, 2016.)