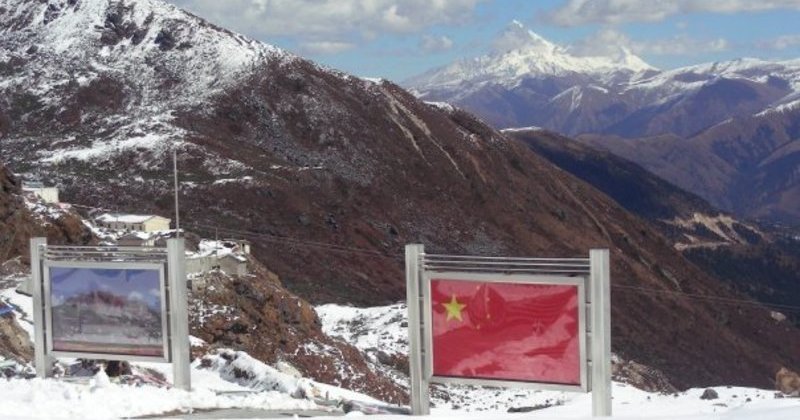 The historic Nathu La Pass on the Silk Route is a frontier that resonates with a violent past and speaks of an uneasy truce in the present. Out here, Hindi-Chini is not so bhai bhai.

Man-made boundaries are like lines in wet sand, drawn with a heavy hand but vulnerable to the sweeping tides of history. I went to the Indo-China border at Nathu La Pass recently, hot on the trail of two arch rivals’ sudden desire to increase trade and shake hands across a border that once opened onto countries called Sikkim and Tibet. What I found, instead, was a frontier that resonates with a violent past and speaks only of an uneasy truce in the present—made in the interests of the new realities of globalisation, perhaps.

The international boundary between India and China at Nathu La Pass is a paradox. The two strands of barbed wire without a no man’s land that mark this ‘friendly’ border are put to the lie by the heavy stone fortifications still intact on each side. The Chinese appear to have built miniature replicas of the Great Wall that descend from the snowy heights both to the left and right of the border, complete with tunnels and a tower, from which a CCTV records, 24 hours a day, all movement (including that of tourists’) on the Indian side.

The Pass itself is not obstructed, however, and tourists can gape at a very worthy view of what was once Tibet. High on the mountain ridges that are under Indian control, and clearly visible in the near and far distance, are what at first appear to be several random piles of stones partially covered with snow. These are the bunkers inside which our frontline soldiers live, breathe (in extremely rarified air) and wake up. Despite the border now being open to trade and tourists, it is hard to find many private vehicles on the 56 km route from Gangtok to Nathu La. What you do see, instead, is a lot of army green: checkposts, tin-roofed clusters of makeshift cantonments, convoys of trucks ferrying supplies, diesel-spewing jeeps (I travelled in one) and artillery that startles you with the boom of its shells ricocheting off the inner ranges. 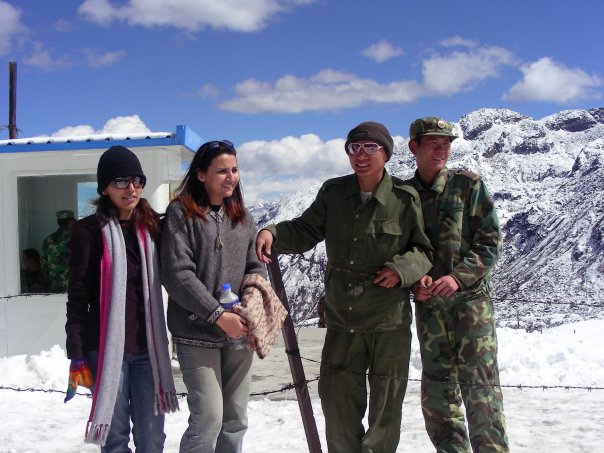 An army colonel in Gangtok, in answer to my query about whether he would characterise the atmosphere at the Nathu La border as friendly, said, “Let’s just say there is no hostility at present.” In fact, the Friendship Gate, erected to mark the opening of the Pass, looks out of place next to the poignant signage extolling the fallen heroes of 1962 and the war memorial commemorating them. Indian soldiers patrolling the boundary keep their distance from the Chinese —it is easy to see why. Even as the Chinese soldiers reach out across the barbed wire to shake hands and pose for pictures with tourists, some of them are not averse to stealing goods from unsuspecting Indians.

I was witness to two unseemly (for any army, anywhere) incidents in the one hour we spent at the border —a student had a Rs 100 note snatched right out of her hand by a soldier, who ran off back to his checkpost, laughing at her distress; another tourist managed to save her camera from being grabbed just in the nick of time. No one can help the tourists because the two strands of wire, easy enough to cross, constitute an international boundary that cannot be violated. As for commerce—the big reason why Nathu La is now a familiar name across India—all the hoopla basically boiled down to importing some yak tails and goat skins (How did we ever manage without them before?). These items, and some sheep, horses, etc., are on the restricted list of 15 that Indian traders trudge all the way up to the Pass and into the village of Renqinggang, in China, to bring back. Of course, they are allowed to export from a list of 29 items as well, including useful things like tea and rice, which hordes of Chinese would gladly grab, except, the Indian government has given permits to only 100 traders.

As to why the number of permits issued is so low, and, worse, why the chosen traders should have been born before 1975, the year Sikkim became an Indian state, only the government of India can explain the mystery. The Chinese have no restrictions on items to be imported and exported or the number of traders who can travel to the Indian mart at Sherathang. They are a little annoyed, though, about their traders not being allowed to stay the night in India; the Chinese have hospitably granted the privilege of overnight stay to tired Indian traders, even constructed hostels for them. Nathu La is a must-visit for history buffs and those who want a ringside view of what a disputed frontier looks like; even with all the talk of cross-border tourism, it doesn’t quite seem that the warlike infrastructure here is going to be dismantled in a hurry.

The Pass does have a fascinating past. It was used as an offshoot of the Silk Route since ancient times, connecting Lhasa, in Tibet, with the Bengal plains. The trade volume through Nathu La became heavy after the British annexed territories belonging to the Sikkimese, Bhutanese and Nepalese in 1815, and later signed an agreement with China. After China took over Tibet in 1950 and suppressed a Tibetan uprising in 1959, the passes into Sikkim became a conduit for refugees from Tibet. During the 1962 Sino-Indian war, the Nathu La Pass witnessed skirmishes between soldiers of the two countries. Although Sikkim was, at the time, an independent country, the Indian army used to man its border with China. The Pass was closed shortly after 1962. Up until when the Pass was sealed, goods, such as pens, watches, building materials, cereals, dismantled scooters, and four wheelers were exported from India to Tibet on mule-back.

A train of 200 mules, each beast of burden carrying 80 kilos on its back, used to take 20-25 days to make the journey from Gangtok to Lhasa and back. The return journey often brought goods, such as, precious stones, gold and silverware, medicinal plants and musk pods. Almost 95 per cent of the traders from the Indian side were from the Marwari community.

In later years, several Indian leaders, including Jyoti Basu, Narasimha Rao and Atal Behari Vajpayee, discussed the opening of land trade through this pass (and Jelep la, another all-weather pass that is only five kilometres away from Nathu La) with Beijing. But it was only in 2004, following the visit by India’s Defence Minister Pranab Mukherjee to China that the formal opening of Nathu La was announced. Due to logistical problems on the Chinese side, the actual re-opening of Nathu La took place only on July 6, 2006. It was attended by 700 dignitaries from both countries, as well as national and international media, despite the freezing rain and bitter cold that prevailed on the day. The re-opening also marked the formal recognition by India of Tibet as part of China and China’s recognition of the accession of Sikkim to India in 1975.

Trade for the year had closed already when I travelled to Nathu La in late October this year. However, history and commerce notwithstanding, geography is a good reason to head to the pass that towers over the relatively low-lying city of Gangtok (4,500 ft) at a dizzy height of 14,400 ft.

The steep gradient is traversed by one of the world’s highest motorable roads and it is possible to make the journey in just two hours. What this translates to on the ground is that one has to cross four climatic zones on the way up—from sub-tropical forest to temperate to wet and dry alpine to cold tundra desert. The treeline disappears at about 12,000 ft and at the time I travelled, snow was already beginning to pile up from this point onwards. In summer, I was told, the route to Nathu La is spellbinding —irises, poppies, orchids and rhododenderons bloom all along the way. Tsangmo Lake, a crystalline tarn fed by glacier-melt, makes for a good en-route halt —its surrounding area is teeming with wildlife such as Brahmani ducks, yaks, red pandas, and migratory birds. Nathu La Pass itself offers a phenomenal long-shot view of the Chumbi Valley of Tibet, and a close-up portrait of the Chinese, of course!

(This article first appeared in Hardnews magazine on December 4, 2006.)