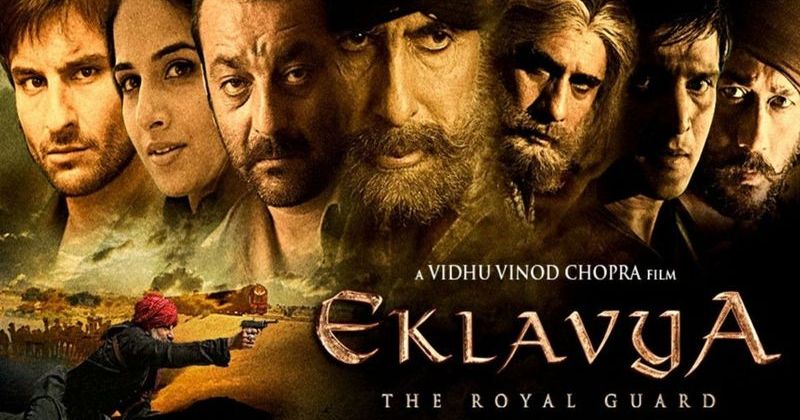 Delhi Maximum City author Suketu Mehta once said of his former friend, film director Vidhu Vinod Chopra, that the latter has an ego so big that he needs a truck to carry it. If self-indulgence is indicative of an inflated ego, Chopra may well have proved Mehta right with his new film Eklavya. What a waste of good money (by some accounts 37 crores) and time (ten years to write the script, five months to shoot the right shade of sky in Rajasthan) on the making of a film that is ponderous, dark, oppressive and just plain boring! Its most worthwhile feature is that it ends in less than two hours.

A more worthwhile one would have been to leave it at being a ten-second promo for Rajasthan.The film opens with the queen (Sharmila Tagore) on her deathbed, calling out for Eklavya (Amitabh Bachchan in the title role), the royal guard whose ancestors have guarded the Rana’s family for generations. In fact, there is no other security or, for that matter, servant in the palace – whenever the royals (Boman Irani, Saif Ali Khan, Raima Sen) need anything, they simply yell, "Eklavvvvvyaaaa!" and the old man comes running.

Well, sometimes, the lone driver (Parikshit Sahni) and his daughter (Vidya Balan) put in an appearance as well. The audience is left wondering as to who maintains the beautiful fort and its gardens and whether there is a cook and a kitchen or the blue-bloods survive on take-out (impossible really, since the village at the base of the fort does not look like it could accommodate a Pizza Hut).

The king’s brother and nephew (Jackie Shroff and Jimmy Shergill) appear to be worse off — although they live in a haveli which has a separate screening room for films like Parinda (another self-indulgence on Chopra’s part?), they cannot afford the services of a professional assassin to execute their heinous plot. And so it becomes, necessarily, Shroff’s do-it-yourself home project.Eklavya’s storyline is twisted enough to merit being called Shakespearean, and some of the film’s scenes are picturised beautifully. But do these translate into a terrific tale told with aplomb? Not really. Ironically, Chopra’s biggest assets — money, time and a big star cast — are his stumbling blocks.

The aerial shots of the palace are slick (Chopra had it painted several times). A herd of 100-odd camels kicks off to produce a breathtaking sandstorm. The outline of chhatris against an orange sky is a feast for the eyes. All these and more must have cost a fortune and Chopra dwells long on the visuals – unfortunately to the detriment of the story, a cloak and dagger human drama that needs action, speed and emotion.Where the story needs context (the workings of an inhabited palace, its place in a modern democratic India), it is starved of dialogues and people.

The big star cast is a liability. Roles that could have been done by extras and small-time actors have been doled out to impressive names like Sharmila Tagore, Sanjay Dutt, Parikshit Sahni and Jackie Shroff. And so, these stars have to be ‘showcased’ in cameos; where a character needs to slip silently into the story, a star’s ‘entry’ is staged instead.All the performances (except Vidya Balan whose facial expression does not change in the entire film) are adequate. The fault, if any, lies in the director’s vision and Amitabh Bachchan, contrary to what Chopra has said, is nowhere near his best in the film.

A note on the film-watching experience — I decided to give the multiplex a miss and watched Eklavya at a theatre frequented by college students and the not-so-well-heeled. The theory that the common man cannot appreciate an intelligent film is bunkum as far as I am concerned — a myth propagated by Bollywood filmmakers who do not know how to tell a story. The last film I watched from the upper stall of a theatre was Nagesh Kukooner’s Iqbal and the audience loved it. The non-multiplex audience, perhaps, has the better measure of a film.

The shuffling of feet and the shifting in the seats begins early — the upper stalls are not awed by the reputations of directors or the amount of money they have spent. This audience does not wait to show its displeasure. And it does not wait to find a way to entertain itself when the movie is not doing the job. Even as a tormented Vidya whispered away to Saif in Eklavya, someone in the audience, who had clearly had it with straining himself to hear the dialogues, screamed, "Nahiiiiiiiiiiiiin" — and the entire hall doubled up with laughter.

(This film review appeared in Hardnews magazine on September 29, 2007. )