From the Closet to the Altar: Gay Marriage in the US

From the Closet to the Altar: Gay Marriage in the US 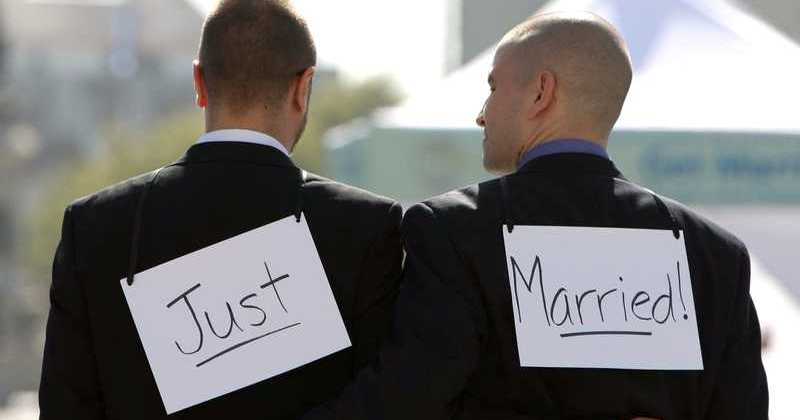 THERE IS A gay and lesbian channel on cable television in Washington DC. It often shows interesting feature and documentary films from around the world, including, in the past, Deepa Mehta's Fire. Quite recently, it showcased a documentary called Dangerous Living: Coming Out, a film about discrimination against homosexuals in the developing world -countries like India, Pakistan, Thailand, Kenya, Egypt, Honduras, etc.

The film struck an ironic chord. Ironic because gays, bisexuals and transgenders were an essential part of the social fabric of many ancient cultures (including Indian,Middle-East wand Far Eastern) for many centuries. But, in the United States, until less than a half a century ago, homosexuality was classified as a mental disorder by the American Psychiatric Association: families often sent their ‘deviant' offspring to asylums to be treated with electric shocks until they would no longer experience sexual desire.

Today, around the world, the US often joins other western nations in championing the cause of individuals persecuted for their sexual orientation. In 2001, when Egypt incarcerated 52 gay men for partying at a nightclub in Cairo, several western countries including the US pressed for their release. The US also often provides political asylum to gays facing harassment in many South American and African countries. Ironically, homosexuality was accepted and tolerated by many indigenous tribes on these continents just a few centuries ago.

So who was responsible for stirring up trouble between peacefully co-existing heterosexuals and homosexuals across Asia, Africa and South America? If you haven't guessed already, the answer is - Christian colonists from the West who preached that homosexuality was a sin and legislated against it in the lands they ruled. In South America, for instance, the Spanish conquerors dealt with natives who practised ‘sodomy' by executing, burning and setting killer dogs on them.

Bias against and fear of homosexuality was hammered in deep -even among those who did not convert to Christianity - and enshrined in the westernised constitutions of many ex-colonies. In addition, the rise of religious fundamentalism in several countries, especially Islamic ones, has also played a major role in modern-day discrimination and repression of gay freedom in the developing world.

However, in contemporary times, life is beginning to turn a full circle for many gay communities around the world because of a peculiarly American contribution. This contribution is not so much political and religious as much as it is cultural, more specifically, in the realm of popular culture. The US has provided gays and lesbians with a public identity and visible culture - courtesy Hollywood, the music industry, television and the internet.

Popular entertainers and figures from the arts (whether personally gay/lesbian or not) like David Bowie, Noel Coward, Elton John, Madonna, Janet Jackson, Cyndi Lauper, Kylie Minogue, Ellen DeGeneres, KD Lang, and the Spice girls, to name a few, have gained iconic status in the gay community for celebrating the gay cause. Films like Philadelphia and Brokeback Mountain were worldwide box-office hits, not just among gays but mainstream audiences.

On the NBC television channel in the US, Will and Grace, a series focusing on male homosexuality, ran successfully from 1998 to 2005. Playwrights like Tennessee Williams and Tony Kushner penned popular homoerotic works like Cat on a Hot Tin Roof and Angels in America that are performed throughout the English speaking world. Homosexuality was also the theme of two successful Broadway musicals-A Chorus Line and Rent.

But the need for this visibility of what many consider an essentially private subject also arose, ironically, from the repression homosexual people in the US experienced in the staunchly Christian immigrant environment of the past couple of centuries. Given the nature of the relationship between the State and religion in the US and other western countries, gays had no choice but to live in closets in order to avoid persecution (compare this with other countries like India, for example, where so many religions co-existed that it was often impossible to formulate laws based on religion).

It was not until the heterosexual revolution of the 1960s, when sex became a subject of experimentation and exploration, that gays finally took their cue to express similar desires more openly. And yet, the Christian belief that homosexuality is a sin was so deeply entrenched that they faced a backlash almost immediately. In June 1969, coloured people who frequented a gay bar in the Greenwich Village district of New York City were repeatedly harassed by the police, sparking off the famous Stonewall riots. The riots are supposed to mark the beginning of the gay rights movement in the US and the annual celebration of their anniversary since has been celebrated through Gay Pride Parades.

The character of the gay parades in the US has changed over the years to become less activist and more celebratory - there are floats and amplified music and a Mardi Gras kind of atmosphere often prevails. The parades are sometimes criticised by many gays themselves as well as by members of the mainstream population. The criticisms usually centre around the display of public nudity, sado-masochistic paraphernalia and other sexualized features in the parades, which the community fears will expose gays and lesbians to ridicule.

Others believe that sexual preference is a private matter and refuse to participate in the gay pride parades. Says Tim Cormack, a 40-year-old gay actor from Kansas City, Missouri: "I am open about my sexuality, but I don't flaunt it. I don't want to hear about what others do in the privacy of their own homes, and I don't talk about what I do. I don't participate in parades because what I do in the bedroom doesn't matter to the rest of my life. Why should I parade about it?"

Notwithstanding the famous gay parade, however, the US has been extremely backward in providing homosexuals with equal rights under the law. Homosexuality began to be decriminalised in some parts of the western world starting in the mid 1800s. Throughout the 20th century, one nation after another followed suit in repealing laws against same-sex practices -including countries like Thailand, Chad, Czechoslovakia and Hungary. But it wasn't until 2003 that the US Supreme Court finally struck down sodomy laws in all US states that had not already done away with them (and the majority had not).

Gay marriages were legalised first in the Netherlands in 2001. Norway, Spain, UK, Belgium, Canada, and South Africa followed suit; but in the US, gay marriage is legal today in only two states - Massachusetts and California (the latter in June, 2008). Some states authorise what are known as same-sex domestic partnerships that allow gay couples to receive the same government benefits as heterosexual couples. But as recently as 2007, the states of Maryland and Iowa struck down lower court rulings allowing gay marriage.

The majority of Christian churches of various denominations, as well, do not sanction gay marriage. The Catholic Church requires people ‘struggling with homosexuality' to practise chastity. The Church of Jesus Christ of Latter Day Saints does not condemn same-sex attraction as sinful but stresses that it needs to be overcome. The exception is the United Church of Christ which condones gay marriage; some parts of Anglican and Lutheran churches also bless gay unions.

Moira de Swardt is the pastor of the Gay Christian Church in South Africa where gay marriage is legal. I asked her how different denominations could have different opinions about something as fundamental as marriage which has been written about in the Bible and has been around since the time of Christ. According to her: "Different Christian groups, sometimes even within denominations, interpret the scriptures differently... very fundamentalist groups often claim to be ‘Bible-based' churches, while liberal churches claim that being a Bible-based church is a heresy because Christ is the Church's one foundation. The Bible teaches that God is love. Thus, the question of homosexual marriage doesn't go to the Bible, but to God's love for his creation. Many other churches, however, rejected our basic belief that Jesus died for the whosoever..."

In the US, the Christian right is deeply entrenched and will likely continue to fight State sanction of homosexuality in any form. The largest international organisation actively opposing homosexuality, Exodus International, was founded in and is headquartered in the US.

But change may well come with help from other mainstream groups that are also fighting for equal rights in all arenas. Says Karen Hickey, a 33-year-old heterosexual mother of two from Portland, Oregon: "My views on equality for everyone, including women and homosexuals, definitely sway my vote. The ‘land of the free' doesn't extend to

The US today cannot be termed the most progressive nation in championing equal rights for gays. But, given the current globalised environment, its contribution in depicting the lifestyle and thinking of a community that has for far too long lived on the margins of western society, cannot be termed insignificant.

(This article first appeared in Hardnews magazine on August 4, 2008.)