Geet Gaata Chal: Life is a Song for These Singing Seniors

Geet Gaata Chal: Life is a Song for These Singing Seniors 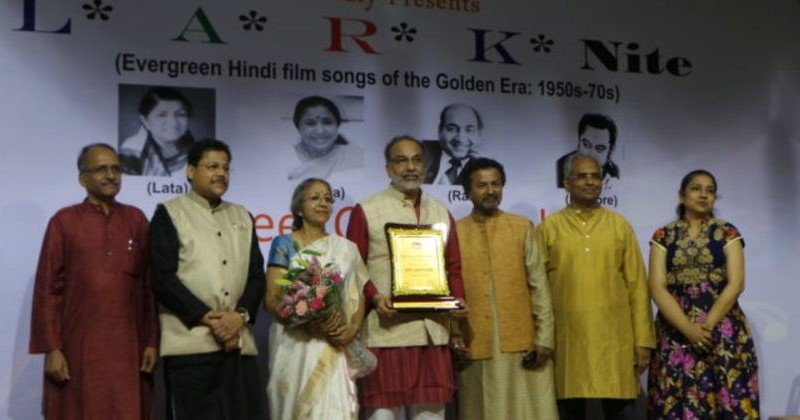 What is it about the golden era of Hindi film music – the 50s, 60s and 70s — that evokes such strong feelings and emotions that people could be smiling and tapping their feet one minute and become all misty eyed and teary the next? These are the thoughts of G.D. Sharma, the founder of a Chennai-based senior citizens musical group called Geet Gaata Chal, as he recounts the events of a very special evening from a few years ago. GD (as he likes to be known), along with his group, was performing at a huge family reunion of about a 100 people in the city. The family members had gathered from all over the country and even flown in from abroad, with the 90-year-old patriarch sitting in the front row and enjoying GD’s rendition of “Jaane kahan gaye woh din, kahate the teri raah mein…nazron ko hum bichhayenge” from the film Mera Naam Joker.

“Suddenly the old man burst into tears and became very emotional. He got up with great difficulty from his chair with the help of family members and used his walking stick to walk slowly towards me and give me a hug and a kiss on my cheek for giving such a moving performance. I became so emotional myself on seeing the reaction of this elderly man to my song – this is an unforgettable memory,” he says.

There could not be a more unlikely setting for a group of seniors that sings old Hindi film songs than the deeply conservative South Indian city of Chennai where Tamil music and Rajnikant dominate pop culture. And there could not be a more unlikely bunch of people performing those songs than a group of senior citizens with South Indian roots who probably cut their teeth on Carnatic, not Bollywood music. This is exactly what makes Geet Gaata Chal so unique.

The genesis of the group lies with its founder, G.D. Sharma, who grew up in Lonavala – bunking school to watch film shoots and humming the tunes picturized on Rajesh Khanna, Jeetendra and other leading stars of the day. Later, as a Human Resources professional in the corporate world, he would bring together musically inclined employees at every workplace where he held a job.

The group in Chennai was started 4-5 years ago after he decided to quit his corporate job and start his own consulting practice. Former colleagues and even clients joined in – they were nine people altogether (5 men and 4 women) until one of the ladies recently moved away to Bangalore. The seniors are roughly in the age group of 50 to 62, although they have recently inducted a woman in her 30s to replace the member who left.

“Initially we started the group for our own fellowship and to socialise,” says GD. “But then we began to get invites for mehendis, weddings and corporate events, so we started going out to perform.Our recent public outing was on 30th June, 2018. We invited all our well wishers to our 108th programme. We had a jam-packed hall of 150 people. Once in a while we do have thematic programmes, like the upcoming ‘Lata 90’ on 8th September 2018, on the occasion of Lata Mangeshkar turning 90. With the money we have raised, we have bought ourselves our own mikes, speakers and mixers because some venues are lacking in good equipment.”

The group’s repertoire straddles all genres and music directors and singers of the Golden Era of Hindi music. “We sing Vani Jayram, Shamshad Begum and Geeta Bali – not just the Latas and the Ashas,” says GD. From among the male singers they often present songs by Hemant Kumar, Manna Dey and Talat Mehmood. Very occasionally, they will perform Tamil and Bengali songs on request, although they mainly like to stick with Hindi songs and are proud of their great diction and pronunciation.

“We’re all South Indian, having grown up in different parts of the country,” says GD. “Two of us grew up in Calcutta, two of us in Mumbai, and one in Hyderabad. We’re basically South Indians but we have great diction and pronunciation because of our diverse upbringing,” he adds. The group has not only received compliments on their perfect Hindi and Urdu but also requests for encore performances at some of their programmes.

But he is not partial to any numbers – all the golden oldies of Hindi film music stir his soul and fan his passion for music, he says.