Love and music not only bring happiness to the infirm and aged in this senior citizens’ home but allow them to share it with others too. Be inspired by the Choir of the Loaves and the Fish!

If you walk past the open windows of the Holy Spirit Senior Citizen’s Home in Bengaluru and hear the sounds of “We Are the World” or “These Are a Few of My Favourite Things” or “I Have a Dream” wafting towards you from the interiors, do step in and explore more. You will be pleasantly surprised, even awed by the fact that the voices that reeled you in belong to a choir of 65-96 year olds whose lined faces are alight with a passion for music.

They practise every week – despite the fact that some of them are in wheelchairs or holding on to walkers or have had strokes and are living with cancer, heart disease, dementia, Parkinson’s, and arthritis. In fact they have even held concerts, not just for family, friends and visitors to their own Home, but in other senior citizen homes where they travelled with a great deal of effort.

The driving force behind this amazing choir, known as The Choir of the Loaves and the Fish, are two women named Pervin Varma and Regina Thomas. Pervin founded the choir sometime in 2012 when she would visit her uncle and aunt living at The Holy Spirit Home. Having always been passionate about music, this ex employee of CRY and TISS, would have casual interactions around music with the residents there.

“For me it was how do I use song and music to bring hope and joy to these senior citizens, giving them a sense of value and worth,” says Pervin.

“One day, we were singing ‘I have a dream’ by Abba and I said, ‘Let’s share our dreams….what are your dreams?’ Many of them immediately said, ‘This is no age to dream.’ It was Christmas time and I said, ‘My dream is to form a choir and instead of people coming and entertaining you this Christmas, we can invite people and perform for them!’”

And so the Choir of the Loaves and the Fish was born – the Biblical reference to Jesus multiplying loaves of bread and fish to feed his followers was interpreted as the seniors offering whatever they had to God and letting Him use it in whatever way He chose.

Their first concert that Christmas of 2012 certainly brought a lot of joy to those who came to listen…the residents of the Home who took part in it were astonished by the feedback they got. They began to practise regularly “because now they had something to work towards,” says Pervin, adding, “Making a difference to other people was a critical element of the whole experience for them.”

Now, instead of waiting for the entire year for a Christmas effort, they have started to do an Independence Day concert as well. The choir performed in another senior citizens’ home and in a church and at a conference at Christ University.

But the process of getting to this stage of giving outside performances wasn’t easy. Many of the residents initially needed coaxing and cajoling to participate. Pervin remembers one of their members, a lady they called Ammachy who was in her nineties, who would often come to the rehearsals in her nightie but sit silently and stare at them without singing a word.

“There is no criteria as such to join the choir,” explains Pervin. “If you want to be part of it, everyone gets something to do – a little solo, or to read something, or, in the case of Ammachy, she finally responded to being handed a pair of shakers. A percussionist was born! She really took to them and during her last two concerts, before she passed away, she even sang!” 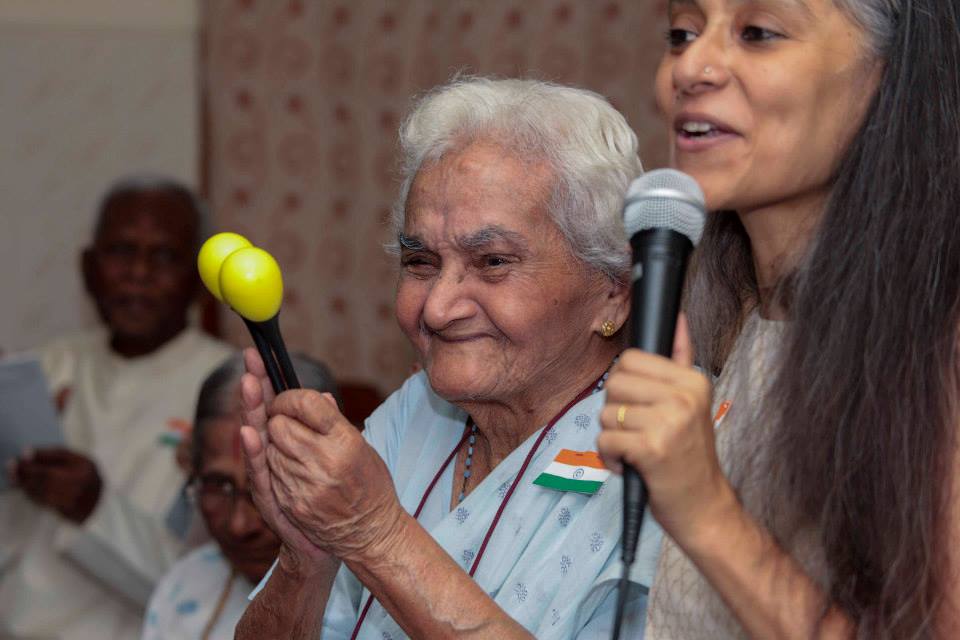 ”Every single time I go there (to the Home), I know why I am there…just to see their joy,” says Pervin. It is clear that she loves what she does and finds it immensely gratifying. “Recently one of our members in her 80s, who suffers from chronic back pain, lost her son very tragically. Despite all that she comes for every session and sings from her heart. While she does not speak a word of English, she learns and sings all the songs just by listening to the phonetics. My own uncle, who had dementia, never forgot the words of a song. In his last concert, he sat on his chair, glaring at me (and I thought he would not remember a thing) but when it came to the solo he sang impeccably. We have Uncle Suresh in the choir now. He was an Air Force pilot and now has Parkinson’s and is in a wheelchair. It is not easy to sing when you have Parkinson’s.But when he sings his voice is so strong. Especially singing ‘Kadam KadamBadayeJa’, the song to which he once marched.”

The theme for this year’s Independence Day concert is “Our Favourite Things” based on the famous song from the film Sound of Music -“Favourite Things”. But the choir members have changed the lyrics to incorporate all their favourite things! Pervin was kind enough to send us an advance preview of the lyrics. Here they are:

Chocolates and dry fruits and
Rich carrot halva
Toffee chews, pomegranates
And Chinese food with champagne
Jim Reeves and Chaudary and Rafi and hymns
These are a few of our favourite things

When the bones ache,
When the nose leaks,
When we’re feeling sad,
We simply remember our favourite things
And then we don’t feel so bad

The Independence Day concert by the choir is free and open to all and if you live in Bangalore, do visit to encourage these eager and enthusiastic singers. It will be held at 5.30 pm on August 15th. The venue is the Holy Spirit Senior Citizens’ Home. The address of the Home is:

(This article first appeared in Silver Talkies on August 9, 2018.)