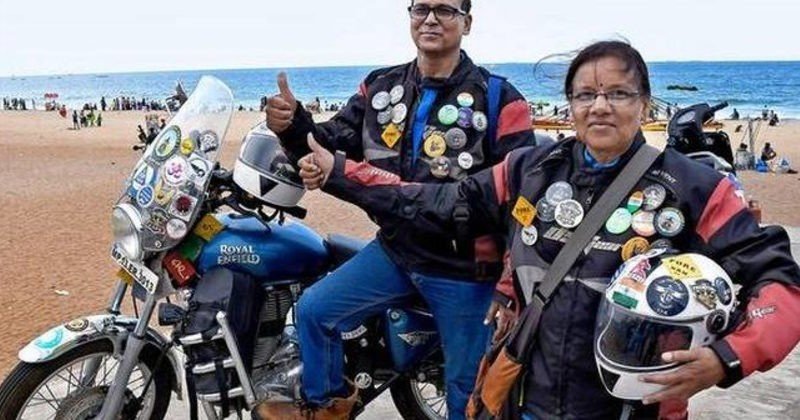 Four granny-girlfriend drivers, a continent hopping septuagenarian and wife, and a senior biker dude and dudette have been hitting the road for the last three years. More power to these road-tripper seniors we say!

While today’s millennials are rewriting what it means to be young in the 21st century, the silver-haired generation is not taking a backseat either. And this is particularly true when it comes to travel – footloose and fancy free is not a term that can be reserved for any one age group anymore as the road-tripper seniors in this story show us.

These eight seniors – spanning an age range of 51 to 73 – have been hitting the road with a sense of adventure and passion for exploration in the last three years.

First up, the rugged biker couple – Dilip Chauhan (61) and his wife Pooja (57) – who are residents of Ujjain, are currently on a bike journey across the length and breadth of the country on their Royal Enfield motorcycle. Dilip is driving and Pooja sits pillion. 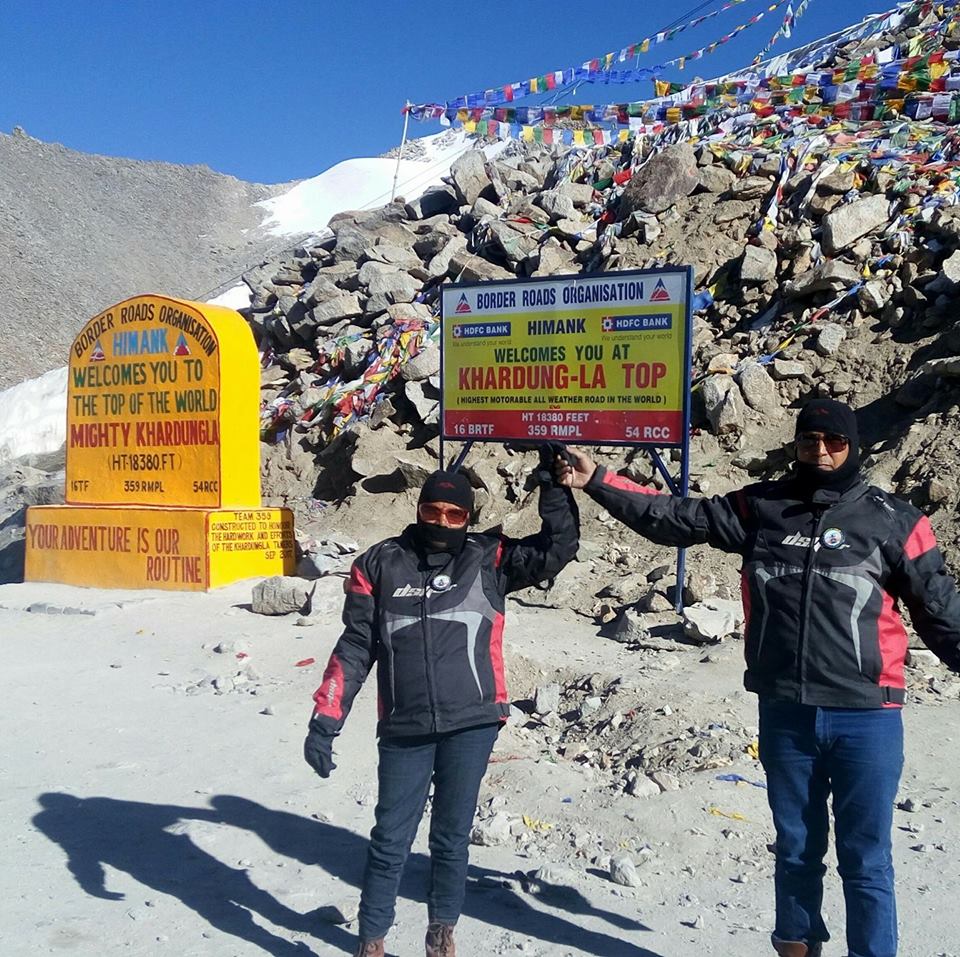 Silver Talkies caught up with them on the phone while they were making a rest stop in Kanyakumari, before proceeding to Trivandrum. The couple had already finished travelling through Leh, Kashmir, Nepal, Bhutan, and north and central India.

“My inspiration is my wife,” says Dilip, a retired State Bank of India officer. “After retirement we both thought we should get close to nature. A four wheeler was ruled out for that reason because one is always looking for parking and unable to stop anywhere to savour the beauty of one’s surroundings, especially in the mountains.”

So, after 15 long years of not riding a two-wheeler, Dilip bought a motorcycle and had it modified for the trip. The couple encountered challenges all along the route including a serious accident on the Yamuna Expressway between Delhi and Agra a month after starting their expedition last September. Dilip fractured his collarbone and Pooja suffered a hairline fracture of the rib cage. Although it took them four months to recover, the couple decided they were not going to give up on their dreams. So it’s back on the road for them, although Pooja has gone through training in physiotherapy since and the couple take suitable age-appropriate precautions on the road.

The twosome is most impressed by everything they have seen so far, despite the fact that the Himalayas with their hairpin bends and treacherous mountain roads have thrown some dangerous situations their way. From celebrating Dussehra with a Muslim family in Srinagar to Diwali with a Nepali family in Dharamsala, being greeted by biking communities in every city where they stop, to enjoying the hospitality of many other strangers, they have developed an appreciation of the true unity within diversity of India.

The middle-class couple is travelling on a budget of Rs. 2000/- a day although “many times we save even on that because bikers all over the country invite us into their homes to stay and have meals,” says Dilip. “We stay in non/ac rooms at medium budget hotels, eat simple meals, and use petrol for about 200-300 kms worth of driving per day. We drive at a speed of 40-50 kms,” he adds. This couple is proof that one does not need a lot of money to make a road trip – just the will to do so is what is required.

A Quick Drive Across 19 Countries

Going back a little further in time, another inspiring story is that of Badri Baldawa, 73, and his wife Pushpa, 64, who, along with their 10-year-old granddaughter Nishi, made a road trip from Mumbai to London in 2016. The 72-day journey, covering 22,200 kms, took them through 19 countries. The couple charted out an interesting route – driving from India to Imphal and from there south to Myanmar, Thailand, Laos and China, before entering Russia and finally Europe. According to Badri, there was no alternative route as it was impossible to go west through Pakistan and Afghanistan or north through Tibet. 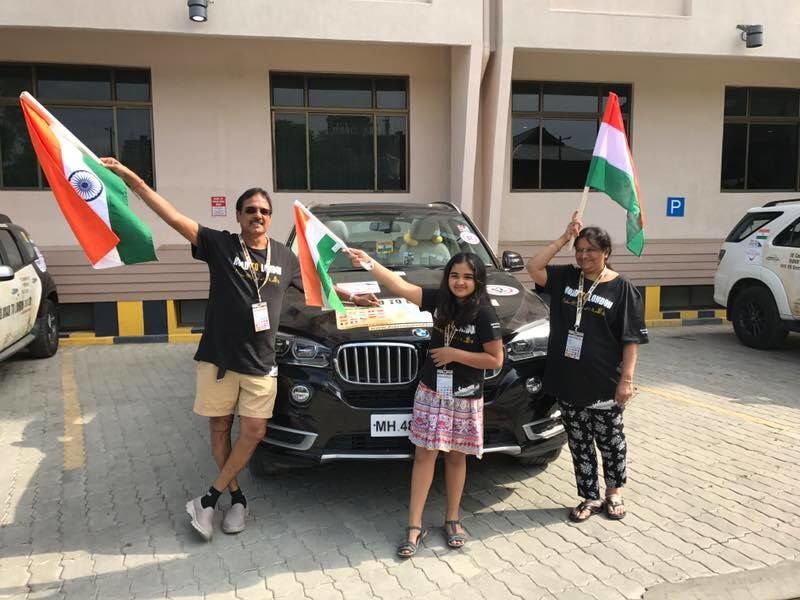 Dare to Embark Say These Grannies

And last but not the least are the extraordinary grannies – Neeru Gandhi (60), Monicka Chanana (51), Sarita Manocha (62) –who have been hitting the road in their faithful Ertiga, crisscrossing the country three times since 2016.

The trips were initiated by Neeru Gandhi who initially faced resistance from everyone, including her sister Sarita Manocha, who was reluctant to go on the trip. “Many women my age don’t drive, and even those who do are afraid of driving on the highways and facing safety issues. I approached many friends but only MonickaChanana agreed. Later, Sarita came around too,” she says.

In 2016, they left on their trip to Rameshwaram by road via five states – Uttar Pradesh, Madhya Pradesh, Maharashtra, Karnataka and Tamil Nadu. The 4,440-kilometre journey took them 29 days with 23 stopovers and was documented on a blog by their families. In 2017, Neeru and Monicka were joined by Pratibha Sabharwal (60) and set off to cover the western part of the country – Delhi to Gujarat and back in a matter of 25 days. 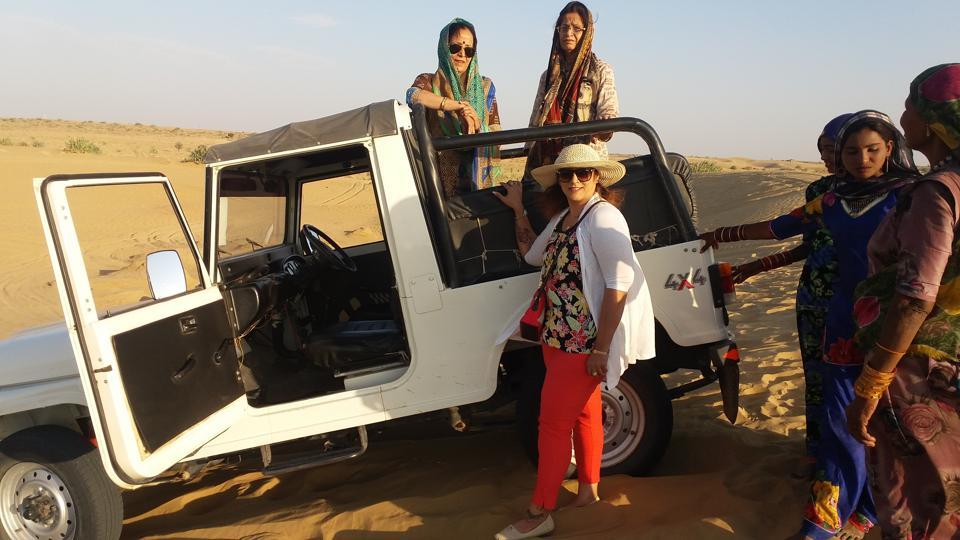 Undeterred by the age factor, the ladies have not allowed anything to limit them – from changing flat tires, to dealing with cops, to staying calm through car breakdowns – they’ve handled it all on their own. Of course they have had fun along the way as well – that was the prime purpose after all – dancing with gypsies, off-roading on dunes, visiting vintage car museums and of course, shopping in the colourful bazaars of Rajasthan. Their favourite destinations from the trips are Hampi, Somnath and Jaisalmer.

The most important precaution they took on the trip, says Neeru, was to pace themselves. They would set off on their journey by 7 am and arrive at the next destination by noon or 1 pm. Then they would rest, take in the sights during the evening and get back to the hotel in time for a full night’s sleep.

The most challenging part of their trip was not the small mishaps with their car but the general male attitude they encountered. People were shocked that not only were they travelling alone but driving by themselves too. “Madam, give the keys to the driver to park the car,” hotel staff would tell them, unable to believe that no male was accompanying them on the trip. However, says Neeru, they did receive necessary and unexpected help from some kind men too when they lost their way or had to change tires.

So what are you waiting for? If these silvers inspire you, it is time to pick a destination, pack your bags, rev up the motor and hit the road. The time to take in the sights and sounds of the country and indeed the world is now, while one’s health and mobility are intact. This is the chance to build memories to look back on during one’s sunset years. Don’t forget to send us pictures!