This Mom Set Her Children Free From the Burden 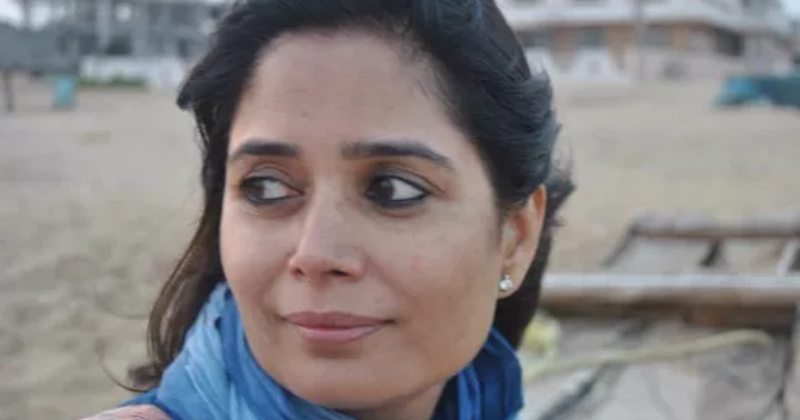 From conforming to rebelling to outright breaking a carved-in-stone marriage tradition, this architect mom made an inner journey that will have a far reaching impact on the lives of her children.

I first met Anant Mann (48) and her husband Siddharth Wig (52) at a parent get together in Chandigarh in 1999. The group had come together to explore alternative schooling options, of which there were very few, in the city. They introduced me to their delightful 3-year-old daughter Purvai Aranya and our families soon became good friends. A few years later Purvai’s sister Savera was born; she too shared Aranya as a surname with her sister.

However, it was only recently that Anant spoke to me of the architect couple’s decision to not give a generational family surname to their children, and of her own evolution as a woman that led to it.

“Did you know I had initially changed my name to Anant Wig when I got married?” she asked me, much to my surprise since I have always knows her as Anant Mann. “I was just 23 when I started dating Siddharth and we got married that same year. The whole experience was very overwhelming. I hadn’t even given any thought to keeping my name. It was 1991 and there weren’t many examples of something like this happening either. The question of my surname came up only four months after marriage when we decided to move to Muscat for work and I needed a passport. Till then I had not changed my name anywhere else. After some thought I decided on Anant Mann Wig and that was the name in which my passport was made. We left for Muscat right after.”

One year later, said Anant, she began to feel “uneasy” with her new name. On several applications and official papers, her name was simply shortened to Anant M. Wig. On occasions like weddings and family functions, invitations would disregard the name Mann altogether and arrive in the name of Anant Wig.

“I still remember the exact day when it all finally got to me,” she said. “We were travelling back to India and those days we would write our names on labels that we stuck on top of the luggage in case it got lost. Siddharth was busy putting the name Wig on the labels and suddenly I got very bugged and yelled, ‘But I’m not Wig, I’m Mann.’ I think Sid was mildly amused at my reaction and thought I was making too big a deal. But I decided I was now not going to live with this name at all.”

Back in India, the couple decided to settle in Chandigarh and Anant, now sure as to what she wanted to do, headed to the passport office to have her name changed on the document. It wasn’t going to be easy. “Kyon change karna hai madam, kya divorce ho gaya?” she was asked. Lengthy arguments ensued and she was finally told to place an advertisement in the newspaper to say she was changing her name officially to Anant Mann.

The advertisement was published but she didn’t expect what came next. “I got a call from my mother at work who said relatives were phoning to enquire if all was ok between me and Sid. They wanted to know if we were getting divorced and if that’s the reason I had placed the ad. I didn’t even know people read these things,” she laughed.

“And so I became Anant Mann again. But, If you really think about it though, what was I trying to prove? Mann is after all my father’s name and that’s the name I am perpetuating. My mother’s name does not even come into the picture. But still, I felt somehow that my identity was linked to it.”

This and similar thoughts continued to play on Anant’s mind even as life moved on and she became pregnant. Their daughter Purvai was born in 1996. Even as they celebrated, the question arose as to what her surname should be. They could name her Purvai Mann Wig but that would, like Anant’s previous name, very likely soon be shortened to Purvai M. Wig, and then, just Purvai Wig. The same thing would happen if they reversed the order of the two surnames. A hyphenated Wig-Mann surname was rejected because it would be too long and further complicate issues down the line if she got married and had children.

“In addition, we thought if the idea was to give the child a surname that carried forward the family name, why not use something more intimate, like one of our parents’ first names? Like Sid’s father’s name Narendranath or my mother’s name Amrit? This would mean that she would become Purvai Narendranath or Purvai Amrit. This made more sense to us so we approached Sid’s father. But I think he had had enough of my whims by then. He got really angry and refused to even entertain the idea. ‘Don’t name her Purvai Wig if you don’t want to,’ he said firmly, ‘But you’re not naming her Purvai Narendranath."

Still not ready to cave in, the couple started to pursue the idea of giving her a surname inspired by people they admired. Since Siddharth used to look up to Gandhi “we even thought of naming her Purvai Mohandas at one point,” Anant broke off into peals of laughter.

“But then our thinking took another turn. We thought the surname should be something different altogether – something that did not reflect, like most Indian names do, a person’s caste, community or religion. People judge you immediately by your surname – it provides all the background information they need about where you come from.”

So that’s how Aranya came about. “It means “from the jungle” or “from the wild” – has no association with any background of any sort. It was anyway one of the names we had considered for her when she was born. Now she had both names. She became Purvai Aranya.”

By the time Savera was born, Purvai had grown up a little and was able to give her own inputs as well into the naming process. “I think she must have decided: ‘Enough of this family where everyone has different names and surnames – can we have some semblance of a proper family name?’ So Savera also became Savera Aranya.”

Was Siddharth supportive through all the years that she grappled with these thoughts, I asked her. Or did he too, actively, want things to be different? “I’d say his role was more supportive than active. In his world view it was perfectly normal for a woman to change her name to her husband’s when she got married. He would have been perhaps okay with a more conventional partner in that respect as well. But when I wanted to change my name back to Mann he went along with it. There was no clash. Maybe he felt I was making too big a deal about it and was amused, but he went with it. Although I still don’t think he’s understood what upset me the day he wrote Wig on our suitcase,” said Anant.

“When it came to the children though,” she added, “he contributed to the process more actively. Both of us had grown by then too as people. Our views had influenced each other’s.”

Today, Savera is 15 and Purvai 21. They are very proud of their surname Aranya and love to tell the story when asked (and they are asked often because it is unusual) about how they got this name. As kids, they had just accepted their parents’ decision but now they understand the meaning and layers and history and thought that went into naming them. And they object to being called Mann or Wig.